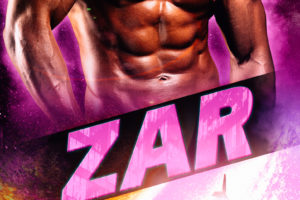 Why waste time on romance when you can just kidnap the perfect bride?

Ashley Donovan is a woman set in her ways, but compared to a Nayanor, she’s apparently incredibly adaptive. Plucked from her ship like many others, Ashley thought her life to be over, but as destiny would have it, it was only about to begin. Granted, it’s with an incredibly infuriating and sexy raider lord whose understanding of common decency and the concept of civil discussion leaves something to be desired. That just means she has to speak up louder, right?

Zar does what any sensible Nayanor in need of a mate does – he raids Terra until he finds the perfect woman. Except his perfect woman doesn’t bow her head and follow orders as she’s told like everybody else’s. Instead, she seems to be an express ticket to get his head cut off his shoulders with her insolence, her sharp tongue and her opinions that are not only dangerous, but blasphemous to the warlord who is the only hope for Zar’s clan’s survival. But gods is she irresistible when doing all of that…

So what’s it going to be? His woman, his clan, or his loyalty? Something’s got to give and it won’t be Zar or Ashley.

Alien Raiders’ Brides is a series of full-length fated mates scifi alien romances with a guaranteed HEA, no cheating and plenty of impossible Alphas!