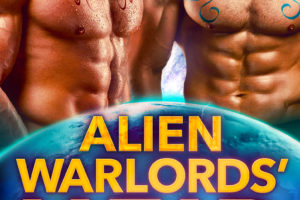 Nothing is more important than keeping her and their child safe.

Dana Hallsey is on her last trip. After so many journeys to the planet of Octava, the Ambassador from Terra has had enough of seeing everybody find their fated when she can’t muster any faith in love anymore. As a single mother, she has to do what’s right for her son – and that’s giving him stability. Not something in abundance in an alien warzone!

Chase and Havoc are two men at odds. The alien warlords are the protectors of their realm and all that stands between Octava and certain annihilation, but sometimes, it feels like they’re a bigger threat to each other than any enemy could be. When fate ties them to the same woman, one who’s stubbornly ready to protect herself, all their conflicts have to come to an end. One way or another.

The fate of Octava, and their love, depends on it.